As most of you know, finding a nice colored vintage Weber grill isn’t an easy thing, especially now that Weber Kettle Collecting has grown into a world-wide hobby.  Now imagine this: It’s 4:30 am. In the darkness of predawn, you are taking your daily walk. You take your typical route and you stumble across an odd looking charcoal grill laying on the curbside.  You’ve never seen anything like it.  You take your cell phone out of your pocket and turn the flashlight on.  You see what looks like a faded yellow lid, two U-shaped legs attached to the bowl, and a wheelbarrow type leg laying next to the bowl on the ground.  It’s obviously a charcoal grill, it’s old, but the rest of the parts don’t make sense.  You pick up all the parts, heavy and awkward as they are…and carry all of it home which happens to be 2 blocks away.  This is what our new member Bill came across one dark, early morning on his daily walk…left for dead. 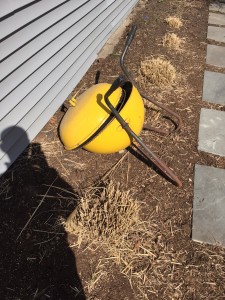 Later that morning, after the sun came up, Bill finally got to look at what he had. He knew it was an old Weber grill based on the what he read on the top vent.   After researching his find and discovering our site, he sent an email to the WKC.   Troy got the email and knew exactly what Bill had found and explained how rare this bird was.  This was the elusive yellow Weber Ranger which dates back to 1965.  Troy contacted Jeff since he owns two Weber Rangers himself, in hopes of helping with questions regarding parts, restoration, and repairs.

Below are some photos showing the initial condition that Bill found his Ranger in.  Some of the worst damage were to the rear legs that were victim to rust and metal rot.   When wheeling around these Rangers, you often see the rear legs taking the majority of the abuse at the bottom loop where they rest (and are dragged) on hard concrete and asphalt surfaces.  Bill also found metal expansion in the legs which most likely was from the inability of moisture and condensation to drain out which resulted in ice (expansion) damage during outdoor storage in the winter months.  Lastly, you also see that the front leg was rusted out through its original welds.  The bowl needed extensive repairs. 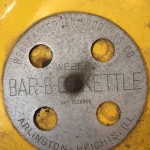 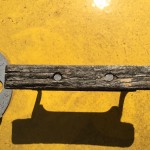 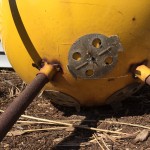 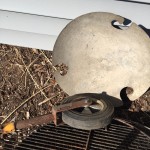 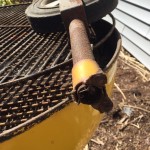 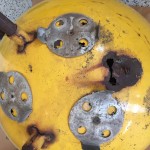 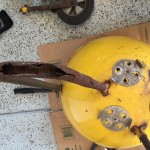 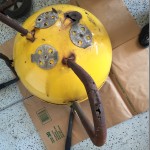 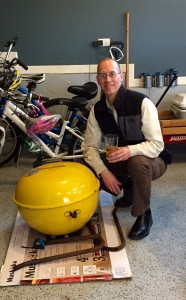 As Bill learned more about the grill…he immediately knew how special it was.  His plan wasn’t to sell it, but to restore it as close as possible to its former glory and cook on it.  This grill needed extensive repairs to certain parts, was completely disassembled, and restored back to almost new condition.   What Bill has now is an instant memory maker.  The road to get to the finished product was going to be long and tedious.  Bill realized this.  Here he is after giving it a quick wipe down…hope that beer tastes good Bill!  You’ve got your work cut out for you!

Beginning to Clean, Disassemble, and Repair

Some of the highlights included in the following pictures include: