Looking to determine the age of your Weber Kettle? Look no further. This page is a collaborative effort put forth by the club founders and historians – owners of 50+ vintage Weber grills – and hours and hours of research.

If your grill was made from 1979 to 2014, the top vent on the lid will have one of these serial numbers which is a one or two lettered date code listed below.

*: Used in conjunction with date codes AT and AH respectively.

†: There are no true “D” code only kettles or WSMs known to exist. There are examples of 1981 “C” code Weber’s that have been seen with a small “D” stamped near or on the opposite side of the “C” stamp. These examples are believed to be the actual 1982 kettles and WSMs.

If your grill is older than 1979, use the following information to determine the age of your vintage Weber grill. 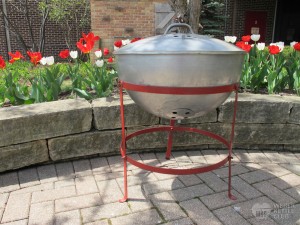 The Weber charcoal kettle was first available to the bbq buying public in 1952. However, the original grills, known then as “George’s BAR B Q KETTLE” were made from buoys cut in half and surviving examples are extremely rare. It wasn’t long before the original “buoy” kettle began it’s evolution. 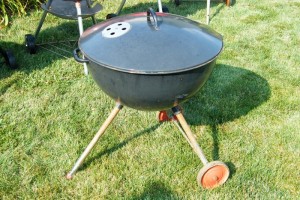 In 1956, the Weber kettle was redesigned to its current shape. The 1956 through 1959 Weber Kettles had a solid metal triangular base (with thin metal red, later white wheels) and the handle on the lid and bowl handles were metal (no wood). These are known collectively as “MLH” kettles. For “metal lid handle” The steel legs are held into the sockets with thumbscrews. 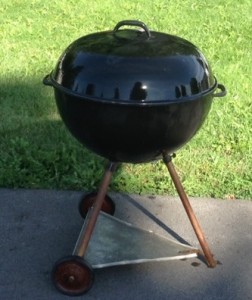 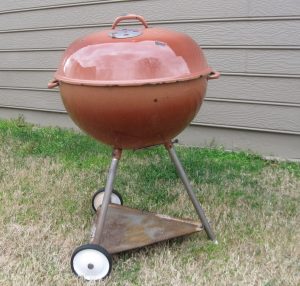 By 1959-1960, Weber began adding saucer shaped ash catcher pans and the solid triangular base utility shelf/triangle “ash tray”  was phased out and replaced with the modern spoked triangle. This spoked triangle is still in use today. 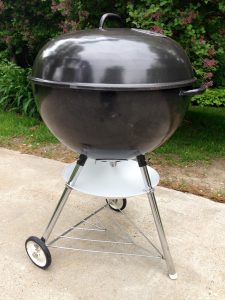 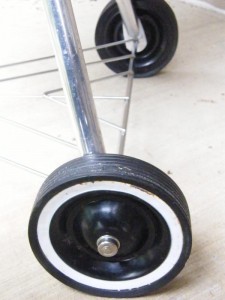 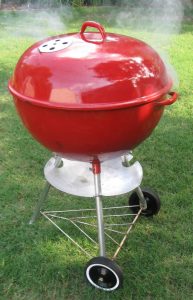 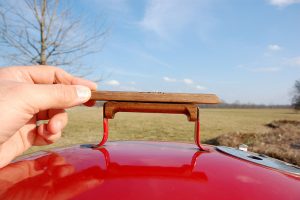 In 1964, Weber upgraded the metal handle on the lid to a wooden one. 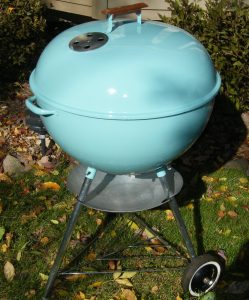 This kettle style (1964-1980) are refered to as “MBH” kettles. This stands for “Metal Bowl Handle”. The first wood handles were made from walnut. Vintage Weber Kettles from this era had metal thumbscrews that held the aluminum legs in their sockets.   The wooden handles were held on with 2 small rivets. 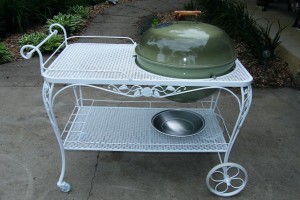 In 1967,Weber also introduced the Seville – a grill mounted in a metal cart with wheels.  This model continued for a few years [unknown] 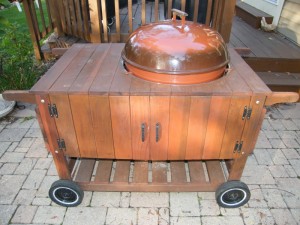 In 1968, Weber introduced the Imperial Sequoia. The sequoia is another grill mounted in a wheeled cart; however the sequoia carts were made from wood. The sequoia came in a couple different varieties. The black kettled version came in a red cart, while the red, avocado, and brown kettles came in a brown cart. 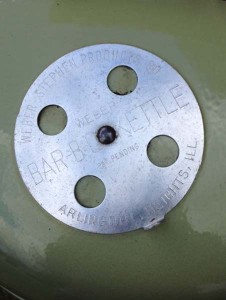 In 1968, Weber designed a new friction leg socket and filed a patent for it. Beginning with the 1969 model year, these new sockets were put into production. While Weber awaited their patent for these new sockets, they started stamping the top vent with “PAT PENDING”. These new leg sockets eliminated the need for metal thumbscrews. The patent was filed for on November 22, 1968, and it was granted (Patent # 3538906) on November 10th 1970. However, in spite of this the Weber catalogs and literature at the time continued to list the kettles as “PATENT PENDING” through the 1972 model year. The patent number is first listed in the 1973 catalog. There are quite a few examples of these “PAT PENDING” kettles out there.  It’s safe to assume any grill with Patent Pending on the vent is a 1969 or 1970 grill however depending on wheel style they could be from as late as 1971-72. 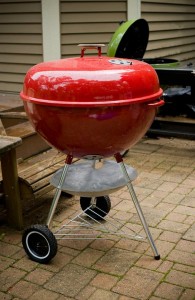 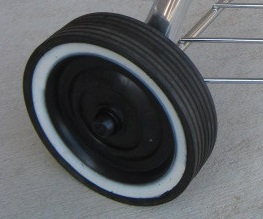 Beginning in 1970, the wheels began a transition from metal rims and rubber treads to all plastic by 1973. 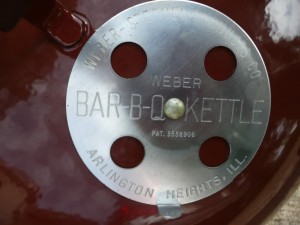 The patent number, 3538906 was first listed in the Weber catalog beginning in 1973. Around this time the number began appearing on the kettle vents. The wheel style by this time was all plastic including the treads. In 1975 the bowl vents were changed from the single small tabs to the large dual tabs.  This is the same vent style found today on the Weber Smokey Mountain Cooker and basic kettle models available overseas. 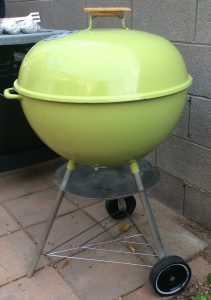 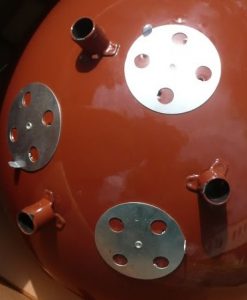 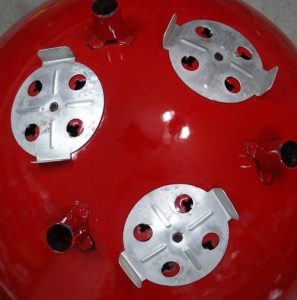 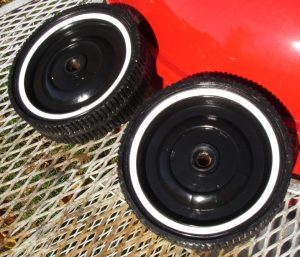 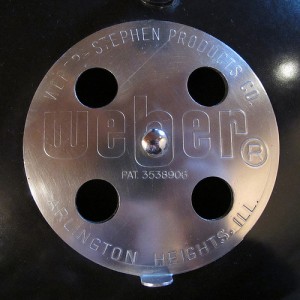 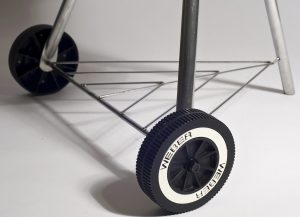 The modern plastic 6″ wheels with the word “WEBER” cut into the whitewall that is seen on basic Weber kettles today is in use by this time. 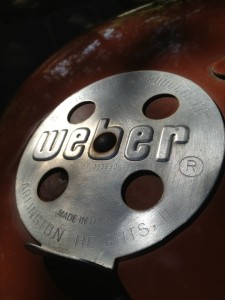 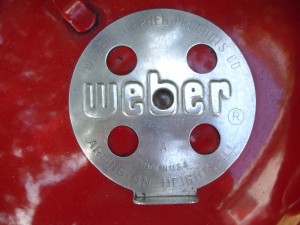 In 1979, Weber started using the letter stamp (their ‘serial number’) to date their kettles. However, the features and details continued to evolve. 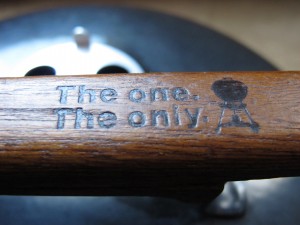 For 1981 the metal bowl handles were replaced with wooden handles. During 1981-1982 the wooden handles also switched from the 2-rivet handle to a single screw.

The “One Touch” sweeping and venting system is introduced. Initially this was a “premium” model before becoming Weber’s standard kettle vent design by 2000. 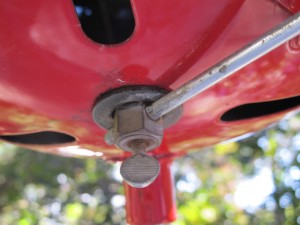 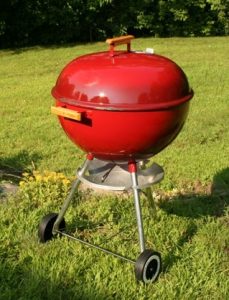 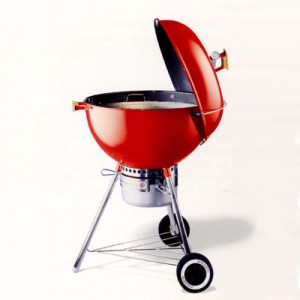 In 1992 the first generation Master Touch kettles were introduced. This would serve as a premium model charcoal grill through the remainder of the 1990s. 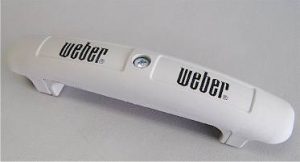 In the year 2000, Weber switches from wooden handles to glass reinforced nylon (plastic) style handles. From 2000-2011 the handles were a pale white-grey in color before switching to the present day design of dark “charcoal grey”. In 2012 the bowl handles on One Touch Gold/Original Kettle Premium models were redesigned with integrated tool hooks. 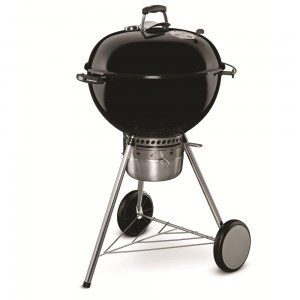 The leg socket design was redesigned eliminating the friction based install instead the legs now have push buttons that snap into “button hole” in the new sockets. This is the first leg socket redesign since 1969.  Also all kettles in the U.S. have switched over form welded on lid handles to bolt on with optional heat shield. The Kettles in the European market have already come with these heat shield bolt on handles for several years.

DISCLAIMER: This page is a constant work in progress. If you have information that disagrees with the information found here, please share it with us in the forums.