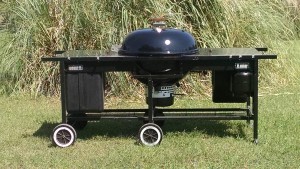 One of the most desired and “asked for” models of grills that Weber has yet to create is the 26″ Performer.   Well this grill may be the closest we have seen to date.

WKC member Ron, aka “TexasOnion” decided he would make his own 26″ Weber Performer.  This custom setup features two stainless steel Performer carts mounted end to end with a couple of custom brackets to secure the two frames together.  Ron cut the mounting brackets from the lid of a 55 gallon drum.  The bowl handle was also removed and the rivets drilled out.  Those two holes, along with the some of the lid bail provisions, and several additional ones were used to assist in mounting the kettle bowl to the frame.  As you can see in several of the photos, Ron took a lot of time fabricating many parts to make this work.

As for the gas assist setup – a donor burner tube, mounting bracket, and ignition system was taken from another Performer.  Since a 26″ kettle with the “Touch and Go” feature has yet to be produced by Weber, Ron used the WKC guide for adding gas assist to a non gas performer.

Next, Ron had to decide where to put the grill lid when he had to tend to his cooks.  Since there was no room for the traditional lid bail like a standard Performer uses, he found a company that offered custom brackets to mount the lid to the bowl.  These brackets are offered for WSM, UDS, and kettles to your size specifications.  Once the bracket arrived, he mounted it up and had to modify the stainless table slightly for clearance purposes.   Below is a link to the supplier of the bracket.

Last and certainly not least, and what I think is one of the best parts of this grill, are the custom handles.   As we know, Brian, aka zavod44, is our resident handle maker and can turn out some works of art.  Ron knew that he wanted something special for this grill and found it.  Back in 1977, Ron’s father had cut down a black walnut tree and make some boards from it.  He still had those boards today, 8 years after his father’s passing.  Ron got to thinking and decided it would be a great idea to have some handles made out of those boards from the Walnut tree.  He sent Brian some of that wood and as you can see…this grill became instantly special.  Ron will always have his dad around for every meal this grill turns out.

Nice job Ron on your custom 26″ Performer!  Looks like you started you broke it in just right with a beautiful looking brisket that was sliced perfectly! 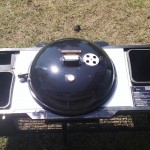 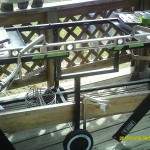 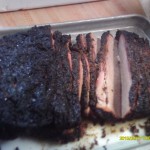 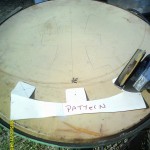 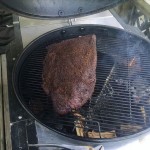 Breaking in the Performer right! Brisket 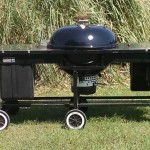 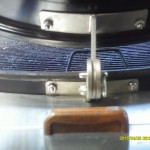