This beautiful redhead has a beautiful story to go with it. It belongs to WKC member Craig. Here’s the backstory on this kettle:

It is from the mid 1960s, it was given to my Grandparents by my Uncle Don and Aunt Sharon as a gift. Originally this grill was thought to have been given to my Grandparents in 1974. However during a 2013 family gathering, I re-picked my Dad and Aunt & Uncle’s brain about this grill and it’s history and they all came to the consensus that it was a Christmas gift given to Grandma & Grandpa from my Aunt & Uncle during the time of my Dad’s first or second year of college which would put the grill between 1966-1967. Dad graduated HS in 1966.  My Uncle Don owned and operated an Ace Hardware in Grand Island, NE at the time and this 18.5 came from that very store. In the early years the grill was only used for Memorial/Labor day cookouts, or they would use it when my Dad would come home from college on nice weekends and it spent the winters unused on the service porch off the garage uncovered. In 1974 my Grandparents moved into a duplex and got their first grill cover as a housewarming gift. Hence the confusion as to when they first got the grill itself.  There it spent its time covered on the lower patio off the walk out basement. In 1981, my Grandparents moved out of the duplex and built a ranch style house on the next block and there the kettle sat on the covered back porch that had green Astroturf and a new as the day they bought it 1950s style redwood picnic table with bench seats that faced Grandma’s well manicured rose garden. It would only get covered in the winter months. This was the first Weber kettle I ever remember seeing as we had a gas scorcher box at home. I remember as a kid getting excited when we would go to my Grandparents in the summer time and Grandpa would fire up the kettle for a “cook-OUT” as Grandma called it. The beauty of the shiny red kettle against the green “porch carpet” really stood out to me for some reason. When it came to cookouts, Grandma had a rule, if Grandpa cooked out, it had to be nice out, we ate outside, there was no eating hamburgers and steaks from the grill inside, Grandma was very particular that way. So if it rained, the “cook-OUT” was canceled and the oven got used. In 2002, Grandpa passed away, and the kettle needed a home, I’d be lying if I said I didn’t ask for it when she sold her house the following year, Grandma said it was first come, first serve, so I got it.  It sat in storage for about 5 years since I was in an apartment, but when my Wife and I bought our house, it came out of hibernation. I was foolish at first and switched the legs, ash pan and wheels to the modern variants, but I kept the originals and finally cleaned them up put them back together with a new handle from Brian. So here it is, The Easterner 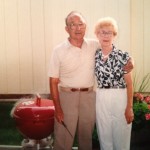 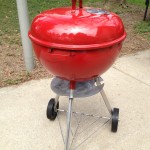 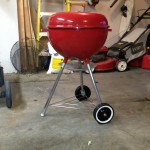 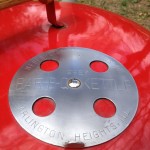 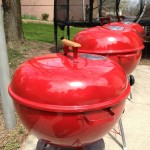