Story: I bought a cottage in Wautoma, WI in 2003 and I already had a grill but I wanted a Weber. In September, 2005 I went to an estate sale to buy some furniture, I got there late and most of the stuff was gone. I proceeded to the basement and found this red Weber still in the box.  Jackpot, I took it home put it together and have been grilling on it since. I didn’t know what a special grill it was until I became a WKC member. Vent has a A code which makes this a 1979. If I found it today It would still be in the box not put together. In one photo you can see the grill it replaced. You just cant beat a 34 year old Red Head! 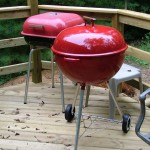 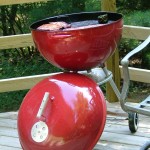 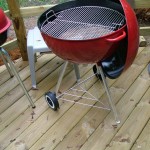