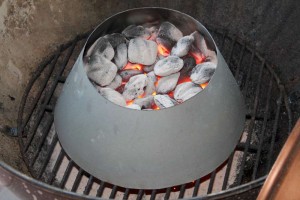 BBQ Vortex in action. It looks like a lampshade, eh?.

The BBQ Vortex has been gaining tremendous popularity lately. It’s a simple steel cone that promises four unique uses in your grill. It comes in a few different sizes to fit your needs.

My first thoughts, before I ever received a Vortex, was that it seemed gimmicky and rather expensive. I was concerned that I wouldn’t be able to provide an objective review, or that I’d stomp on the souls of the creators. Let me point out that the creators of the Vortex are super nice people, as are the BBQ store owners that are often seen promoting the BBQ Vortex. They shipped me some rub samplings and some BBQ Vortexes, or Vortices if we want to be scientifically accurate. Super nice guys. All of them.

I’m not going to lie. This thing is a LOT heavier and more rugged than I expected. The BBQ Vortex is shaped from thick steel sheet metal and welded together. The edges are sanded a bit to remove any sharpness, or at least they are on the ones that I received. The unit is heavy and durable. I’ve tossed it around, left it out in the rain, rolled it around on the pavement. No dents, dings, or damage whatsoever.

DIY Vortex? If you are handy, you can probably make your own BBQ Vortex. But factor in time, talent, and materials and you are better off buying. Like I said, the material is THICK. A cheap stainless steel bowl or pot will not perform as well.

The Vortex boasts four methods of use, 3 of which are indirect. I put each method to its test, some of them several times. I compared with other techniques like fire bricks, Weber charcoal baskets, and aluminum foil. Aside from being a pain in the ass, it was actually quite the learning experience.

Method One: Direct Heat – The Sear Zone
This method is Volcano style, with the small opening on top. It creates a super high heat zone directly above the Vortex. When I first tested this method, the temps above the BBQ Vortex were only marginally higher than two full Weber baskets. I used a steel plate and an infrared thermometer to compare. Both the Vortex and the baskets brought the steel up into the 800 degree range using Coshell. This was very disappointing at first, but when I ran the test again using Kingsford, the results were very different. The sear zone over the vortex was once again crazy hot, right around 650-700 degrees, while the baskets barely hit 500. The BBQ Vortex DEFINITELY created a super hot sear spot.

I seared a few different beef steaks, as well as a couple nice tuna steaks. It performed as expected. While using kingsford, the sear over the Weber baskets sucked compared to the Vortex. While using lump or coshell, the sear with baskets pretty much matched the Vortex.
The Vortex hotspot burned the seasoning off my grates during testing. They literally got so hot that they rusted.

Verdict on the Sear Zone? It definitely gets hot. Possibly too hot. Too small to sear several steaks at once. However this method ALSO makes a kickass wok setup. If you are a reverse seared steak cooker, the vortex will help you save time and cook more evenly. Just make sure you oil your food. 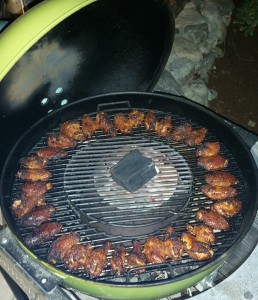 The best way to grill wings: With the BBQ Vortex

BBQ Vortext Method Two: High Heat Indirect – The Ring of Wings
This method is the exact configuration as the previous. The difference is in the food placement. Radiant heat is channeled straight up. The area around the Vortex is shielded from much of the radiant heat, but still remains a high heat cooking zone via convection. The temp around the ring will hit 450-500 while using Coshell, slightly less with Kingsford.

This method is AMAZING for chicken. Chicken wings, chicken drumsticks, or chicken thighs – this thing is a chicken cooking machine. Place a single chunk of wood over the center of the vortex to get that perfectly smoked chicken. This technique makes killer wings, and it’s SO FREAKING EASY.

For comparison, I made wings using several configurations. The first was two Weber baskets in the center with the ring of wings around it. These wings came out great, but they didn’t cook as evenly. Some wings charred quite a bit, while others had no char. Some wings were perfectly crispy/bite through, while others had a bit of chewy skin. My 2nd config was a two zone set up. Banked hot coals on one side, with the rest of the grill being cool zone. This was a LOT more work than the Vortex. I needed to move wings around quite a bit to keep them cooking evenly. My hands were sore from all of the tonging. The wings were, once again, mostly inconsistent.
Verdit: The BBQ Vortex wins the wing competition hands down. This method alone makes the Vortex worth buying.

Method Three: Indirect
With this method, the BBQ Vortex is used upside down – with the large opening facing up. The hot coals are placed around it instead of inside it, and the food stays on the grate directly above. The Vortex deflects the radiant heat and allows the food to cook indirect.

I’ve compared this with fire bricks, banked coals, and baskets just as the How to Smoke on a Weber guide explains.
It’s certainly comparable as far as the results, but food space is limited. I cooked a low and slow pork butt, and a spatchcocked chicken. They came out fine.

Verdict on Indirect method? Not worth it. Banking or baskets is just too easy. There’s not enough, if any, benefit of using this method.

Method Four: Infrared
This technique is the same as method 3; however, the food is placed inside the inverted vortex.

To compare this method, I cooked two beer can chickens (minus the beer can, because BEER CAN CHICKEN IS STUPID)

I was already skeptical, perhaps because the only practical use of this method involves a standing chicken…
But it worked quite well. I cooked one bird on a chicken stand inside the inverted vortex, and another bird on a stand in a separate grill with banked coals. Both birds sat at the charcoal grate level. Both cooks used equal amounts of fuel, and both birds were within .25lb of eachother. The Vortex bird cooked slower and more evenly. The banked coals bird had burnt wings and leg tips and overall had more color. Both chicken skins were bite through, the banked bird had a little more crisp. Tasters claimed the meat texture of the Vortex chicken was better, but they were eating legs and thighs which were overcooked a bit on the banked bird.

Verdict: If you’re into beer can chicken, which you shouldn’t be, this technique will help you cook more evenly. I still prefer spatchcocking or rotisserie chicken.

The Vortex may be overpromising a bit with their 4 techniques, but the Ring of Wings technique alone makes this device a must have. My family has always loved wings, but there weren’t on the menu often because turning out big batches just wasn’t easy enough. With the Vortex, I can cook two days worth of wings in 1.5 hours including prep time and sides. Wings are on the menu every other week now and the Vortex has a semi-permanent home in one of my grills. Is the BBQ Vortex worth it? Yeah, it’s totally worth it.

Where to buy the BBQ Vortex
The makers of the Vortex list several BBQ stores that sell the vortex. A few of those stores have owners who are active here in our Weber Forum, so they’ll get the nod here. Owens BBQ, Mad Hunky Meats, and Big Poppa Smokers.

I’d like to point out that Mad Hunky sent some wing rubs to try, since he knew I’d be cooking a metric shit-ton of wings during my tests.
The Mad Hunky wing seasonings are FANTASTIC.

BBQ Vortex Giveaway
The creators of the BBQ Vortex have given me a couple extra units to give away. You can enter by leaving a comment, or by tweeting a link to this page. You can enter every day too!