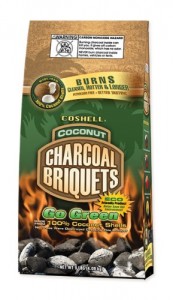 While perusing my favorite local grocer a few months ago, I swung by their grilling aisle to see if they had any wood chunks. I always stop and check, even though they rarely do (and I rarely actually NEED them). This time, though, I noticed an alien product there on the shelves in place of where the massive stash of never-selling and always-on-sale Cowboy Charcoal was. At first I assumed it was something generic and crappy due to it’s super glossy plastic bag. I pulled a bag from the shelf and noticed pictures of coconuts!

Extruded coconut charcoals are an almost mythical and magical fuel that I had only read about on the internet. It’s almost as if these fuel-making techniques were passed down from gods and are the best kept secrets of the monks or jungle-dwelling tribes who make this stuff. They’re known to burn SUPER hot, SUPER clean, and burn for a long time while producing very little smoke, smell, or even ash. They’re also known for coming in weird shapes like hexagonal blocks with round holes in the center.

The bag had some heft to it. I groped it up a bit trying to feel what geometrical shape the charcoal was. Briquettes. Damn. I’ve long been a briquette hater – although it is completely illogical and unjustified. It’s worth noting that several people took note of my excitement of seeing a new charcoal AND my ‘groping’ of the charcoal. It’s possible that I made some whimpering or gasping sounds as I rushed over to the bag and gropingly embraced it.

At $8.99 for an 18-pound bag, the price sounds about right unless you compare it to the price of Kingsford. However the bag DID seem small. Definitely smaller than a 20lb bag of Kingsford – but just as heavy.

First Cook
My first cook with this charcoal was a couple thick cut pork chops. I didn’t really know what to expect with it, so I used 2/3 of a chimney. I expected my total cooking time to be about an hour (with all the veggies and shtuff). As the Coshell charcoal lit, there was very little smoke. Significantly less than Kingsford. It didn’t light quite as fast as other charcoals – but by no means was it slow to light.

I let the gas-assist feature of my grill work its magic for about 7 minutes. After another 10 minutes I went out to check if it was ready. The chimney itself was glowing orange and thick white and blue flames were rising from the top like an afterburner on a fighter jet. The handle on the chimney was too hot to hold for more than 20 seconds. As I poured the coals into the kettle, the hair on the back of my hand and wrist curled up and melted. My eyeglasses made little crackling sounds as the heatwave hit my face. I poured the coals into a 3 zone configuration, but it really ended up being closer to 2 zones.

The coals were still burning a white and blue flame, so I put the cooking grate on and left the lid open for a while to let the charcoal burn down.

I came back after about 10 minutes to find my cooking grate had changed from it’s shiny black seasoning to a grayish white. There was an area about 5″ x 5″ that was actually glowing orange. This charcoal burned the seasoning off my grates! 😐
I was giddy with excitement and wished I had some tuna steaks to sear instead of pork chops. 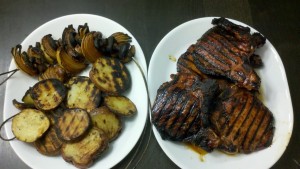 These thick pork chops cooked in 3 minutes per side.

I brushed grapeseed oil onto the grates and then tossed on the pork chops. They sizzled like mad.

The heat was so intense that my thick cut pork chops were cooked perfectly at 3 minutes per side.

I grilled some sides (potatos, onions, mushrooms) before shutting the vents to extinguish the coals.

This is where it gets fun. The next day, I went out to light the grill. The leftover charcoal seemed to be in its original size! I moved them around with some tongs and very little ash actually fell off. The remaining briquettes were still big and mostly unused!
I tossed them into the chimney and lit them again without adding ANY fresh charcoal (I’ve never done this).

I cooked steak and baby yukon potatoes. The cook took about an hour and I once again closed the vents to extinguish the coals.

On the 3rd day, I went out to light the coals. This night’s menu was turkey breasts.
The coals had gotten smaller, and some split in half when I picked them up, but they were still VERY usable! For this cook, I added 6 new briquettes.

The 6 fresh, and dozen+ remnants held my grill at 400+ for an hour. After the cook I decided to season my grates and let the coals burn out. I seasoned the grates at 7:30pm. When I went to bed at midnight, the temp gauge on the lid was still around 300.

Cliffs Notes: Final Thoughts on Coshell Charcoal
This is truly the first ‘re-usable’ charcoal I’ve ever used. I think that is one of the best benefits of it. Even though I’ve managed to burn through 3 bags of it since I discovered it this summer, the fact that a chimney of charcoal can provide fuel for several serious cooking sessions is really impressive.

I LOVE that it doesn’t produce shit-tons of ash. If you’re used to kingsford (which produces a pathetic amount of ash) this stuff will be a major change for you.

It burns REALLY hot. If you’re used to kingsford, this may be a problem. I’m used to lump, which burns a lot hotter than kingsford, and coshell seems to burn hotter than lump. So hot in fact, that it burned off some of the high heat paint on my red 26″ weber. A chimney of this stuff will seriously hit 1100 degrees.

It actually works out to be affordable. At $9/bag, and with a bag lasting 7 cooks with proper and careful re-use, it comes down to <$2 per cook. No funny flavors. No funny smells. No weird shit found in bag. No requirement to clean out ash pan every other cook. I love this stuff.