I’ve been wanting to restore this old Dutch Oven (somethings referred to as a Camp Dutch Oven because it has feet and a raised-lip lid) for some time. I found it at an antique store in Railroad PA years ago, and it sat in my barn gathering dust and more rust since then. I had heard about this thing called electrolysis a while back, but figured this was too far gone to save. Almost trashed it a couple times during our annual clean-out. 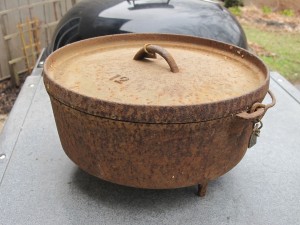 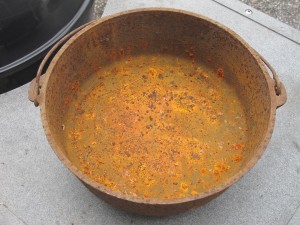 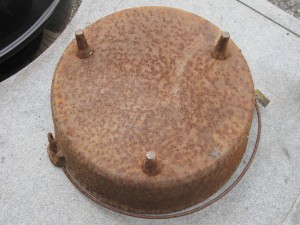 Now we all know how well cast iron and Weber kettles go together – a perfect match for many dishes, and anyone with a kettle should own at least one oven and a skillet made of iron.

This techinique works extremely well for cast iron grates, too!

I’ve been using my “indoor” dutch oven (a Le Creuset 5 qt) for some time, but the cleanup takes forever – especially if I’m using smoke wood. I really needed an “outdoor” oven; one that I could set directly on the coals without worry. This old rusty 12″ camp dutch oven might just do the trick, but I would have to figure out how to do this thing called electrolysis first. Thanks to the internet, and the hundreds of videos of people using this process to clean up all kinds of rusty old stuff, I thought I would give it a try. I had a plastic tub, a battery charger, and some scrap metal. (Don’t we all?) All I needed to buy was a box of Arm and Hammer Super Washing Soda – set me back $3.50. 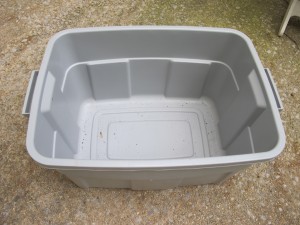 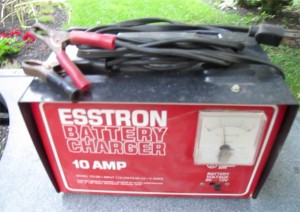 Setting up the tank couldn’t have been easier. 10 gallons of water from the hose, and 10 tablespoons of washing soda mixed in. An old Smokey Joe grate I had laying around (don’t we all?) served as the anode – it would attract the rust from the oven once I hooked it up to the charger. (I hope…) Submerged the bowl in the tub, hooked the negative clip from the charger to it, (note that the clip is actually under water at this point – seems to work fine like that) and hooked the positive clip to the SJ grate. (keep this one above water if you know what I mean) Plugged it in and waited… 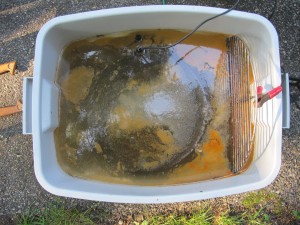 In the morning, I was anxious to see what happened. I was expecting little progress. After all, this thing was RUSTY! To my amazement, when I lifted it out of the tank, it was nearly rust free! A few minutes with a wire brush and it started to look like new. I was amazed – my wife was amazed. It was amazing! 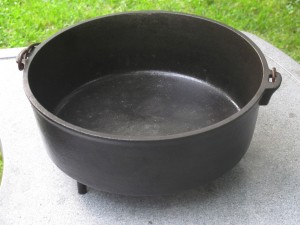 The lid went in next – same solution. 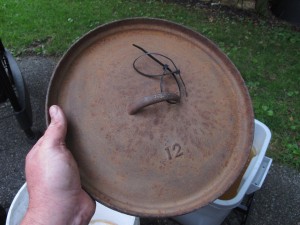 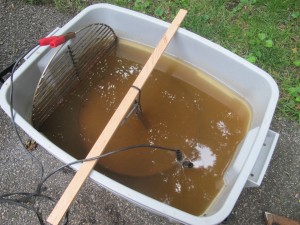 No need to start with clean water – the process works just the same regardless how grungy the water looks. Fast forward another 12 hours and the lid came out just as clean! 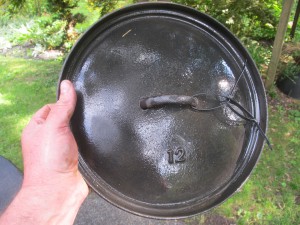 Started thinking about how to season the oven, and again hit the web for advice. Well, let me tell you there are a thousand opinions about what to do or not to do. After drying it out in a 200 degree oven for 15 minutes or so, I ended up using course salt and a little solid shortening for the first stage – to clean out any remaining grunge and rust. 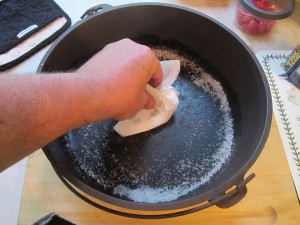 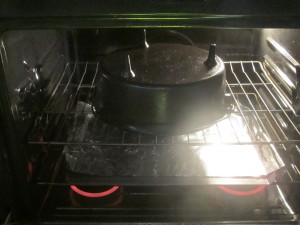 Again another wipe down – this time with Canola oil and salt again, a thorough wipe down and some time on the Genesis grill. (Just to Weberize it a bit.) 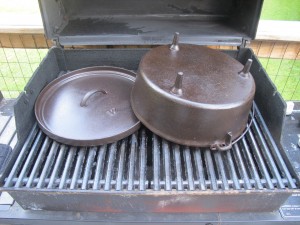 Mission accomplished! I’ll be using the oven often now, and will be on the lookout for more rusty treasures to add to the “outdoor kitchen”. 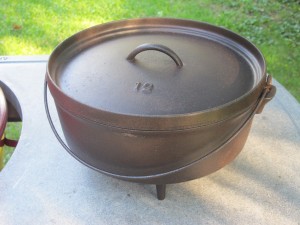 Postscript: Here’s the SJ grate after 24 hours in service. Looks like it’s good for another few ovens! 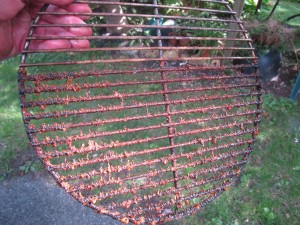 The oven had a pair of tags on it – likely the owner had used it in group cooks or competitions in the past.  Fun to think about the meals it has seen, and even more fun to think of the meals to come! 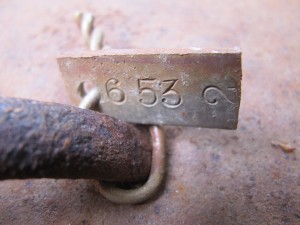 And a few tips I learned along the way: