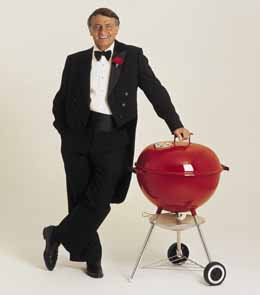 The iconic Weber kettle was invented by Mr. George A. Stephen, who was the late founder, and former owner & president of the Weber-Stephens Products Company. George passed away in 1993 but his legacy lives on at WKC and in millions of backyards around the world.  Today we celebrate George’s accomplishments and birthday!In the early 1950’s, George was an employee of the Weber Brothers Metal Co. He was destined to become the original grillfella when he had the inspiration to modify a metal bouy into the kettle bbq we know and love today. The kettle barbecue would forever be part of Americana bringing “covered cooking” and delicious bbq to people worldwide.

Here’s to you, George!