He was a regular guy, with a regular guy name:  Bruce.  A mechanic, if I remember correctly, with hands weathered by years of working on HVAC equipment.  We knew each other from church, but he was wary of church.  He grew up there, and obviously liked a lot about it, but was somehow distant at the same time.  Wounded, maybe.  It was hard to tell.  We would have some lively conversation, but things didn’t pick up until he realized I had grown up with a Weber Kettle.  That was when the real relationship began. 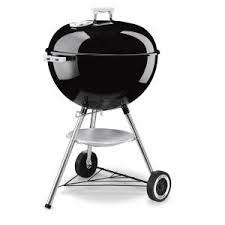 Better than talking about grills, of course, was the use of them.  It wasn’t too long before Bruce invited me and my wife over to his apartment for a Friday dinner on a cool northern California evening.  Out on the deck, the Kettle was heating up while Bruce seasoned a large piece of beef.  “Ball Tip Roast” is what he called it, claiming that it was great because it was so affordable, and in fact was usually ground up for hamburger.  His butcher had rescued this one and Bruce was excited to share it with us.  It was at least three pounds, flat on the bottom and mounding up in a perfect sphere.

I was dubious about such a large piece of meat cooking all the way through, for I hadn’t yet learned what Bruce wanted to teach me:  that though the Weber Kettle is great for burgers and brats and steaks and other thin pieces of meat, it really excels as a kind of live-fire convection oven.  Bruce banked the coals around the perimeter of the kettle, put on the grate, set the seasoned roast right in the center, put on the lid, and finally started to relax as he extolled the many virtues of the Weber.  About how efficient they are.  About just how even the heat they provide is.  About how a friend of his had baked a cake in his kettle, just to prove the point.

If memory serves, Bruce pulled that roast off about an hour later. He let it rest a good while, then sliced off juicy, succulent pieces.  My mouth still waters, just thinking about it.  And my brain still buzzes with the almost endless potential of the kettle.  Bruce didn’t just make us dinner– he gave me a vision for a beautiful future of cooking and camaraderie and creativity.

Shortly before we moved away from California, Bruce asked me to speak at his wedding, which I was of course honored to do (and yes, I referenced Weber grills in the homily).  The card he gave me as thanks was stuffed with money.  Not a lot of money, mind you, but a lot of bills.  One twenty, some tens, a few fives and a bunch of singles.  It wasn’t quite enough– but almost enough!– to, as he said in his scrawl, “Buy your own Weber”.

I thought about that generous gift all along our drive to Michigan.  We had barely settled in to our small rented house when we drove an hour to the nearest Wal-Mart to buy a simple black 22.5-inch One-Touch Silver.  I assembled it in the living room, then shoveled off enough of the deck to roast my first chicken (in the middle of a snowstorm).  Later, when another friend took me fishing in the straits of Mackinac, I’d roast whole salmon on that same grill while the gulls lined up on the ridge of the roof to wait for me to accidentally leave the lid off.  And of course the Thanksgiving turkey was just a matter of time. 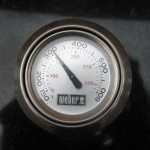 I’ve unfortunately lost touch with Bruce, though I’ve roasted lots of stuff by now, and even baked a cake or two.  The thing that eludes me is that incredible ‘ball tip roast’.  I’ve researched it, and asked about it, and even engaged in a bit of sub-primal butchery of my own, but I haven’t found a clear consensus about what that cut is, exactly.  And of course I’ve never made a piece of roast beef that tasted quite so good.  The quest for a very cheap cut of meat that tastes better than prime rib is one I expect to pursue for the rest of my days.