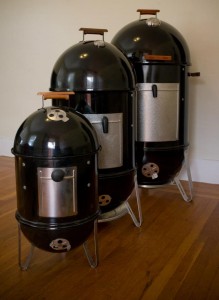 An anonymous but credible source close to both the Weber Kettle Club and Weber-Stephens has reported that in 2014 Weber will officially Re-Launch the 1880. This rumor has surfaced a number of times in years past, but has never actually came true. This time there’s enough details to actually be believable!

The 2014 Weber mini WSM doesn’t have an official model name, although we’re told it will NOT be an 1880.
It will have a few upgrades as well. The new mini smoker will have an ash pan (which is actually a heat shield) that clips onto the legs like the 18″ and 22″ WSMs have. It will sport a temp gauge in the lid. It will also have two small holes in the lid for temp probes! These two holes will also make their way to the 18″ and 22″ WSMs in 2014.

The market has changed though. Charcoal is getting more expensive. More and more of us Weber Kettle Club members have built Mini WSMs using a Weber Smokey Joe and a giant tamale steamer pot.

Weber has clearly taken notice of the WKC, our passion for its products, and our innovative habits.