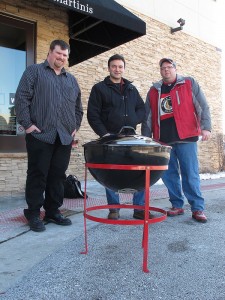 Here are 3 of the 5 original founding club members.

This past January, I had the pleasure of meeting up with a few other Weber Kettle Club members. We met for lunch and beers at the Weber Grill Restaurant in Schaumburg, IL.

Who was there.
Jeff K, the man whose colorful collection sparked inspiration and collection envy for me and countless other grill Weber grill enthusiasts around the world. Jeff arrived with his wife, who not only tolerates Jeff’s garage-o-grills – but also played a part in starting it all! Both Jeff and his wife arrived wearing Weber attire. Show-offs.

Brian, the man behind all of the amazing replacement wood handles was there. Brian eventually sprawled his wood out all over the table. Brian brought some new handle prototypes and rare wood versions that he had been working on. I don’t know if they’ll ever be for sale – but they were AMAZING and I totally want some for my grills

In addition to those two founding members, Marty was there. Marty is likely the hardest working man on the team behind WKC. Marty arranged the meetup. Marty called ahead and told them about our club. Marty arranged to meet up with the manager and the corporate chef for Weber Grill. And Marty has been working on official Logo and T-shirt designs as well. Marty showed off his wood as well, some KOA wood from Hawaii – which makes some BEAUTIFUL handles.

What Went Down
I arrived early because the Weber Grill Restaurant in Schaumberg is a known Ingress portal. I had to hack it, destroy it, and capture it for myself. [Yeah, I’m geeky on a lot of different levels]. After doing the “I’m about to piss myself” dance in the car for 20 minutes, I decided to go inside and wait there for the rest of the guys. I was ecstatic to find Bells Hopslam Ale on tap. This hard to find and extremely limited beer clocks in at a whopping 10% alcohol. 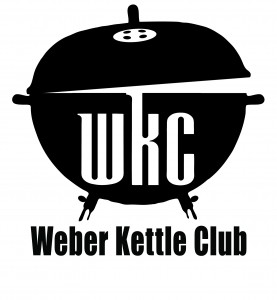 Here’s the logo Marty and I have been working on

Within a few minutes, a gentlemen arrived and immediately started oogling the replica original kettle near the entrance. I immediately knew this was Marty – even though we had never met. Marty ordered a beer and immediately started wandering around the restaurant taking pictures of the grills and decorations. People were looking at him like he was an asian tourist, but he didn’t mind.

As Marty and I swapped stories and finished our Hopslams, Jeff and Brian arrived. We darted from grill to grill again, critiquing the lame plastic handles and pondering ways to build a replica of the Original Weber Kettle. There were more photos, and more confused onlookers and staff members. Marty explained again to the staff that we were all obsessed with the Weber charcoal kettle.

Lunch
We had the magical steak on a stick appetizer, which had originally kicked off my grilling obsession about 8 years ago. Brian and I opted for the farmer burger – which was F’in incredible. Since Weber Grill Restaurant gets their meat incredibly fresh (and tested before AND after the grind), it’s actually quite safe to eat at rare. Jeff ordered the beer can chicken. Now before you go getting all snobby and commenting that beer can chicken is a waste of beer and has no flavor impact, the chefs at Weber know this. Their beer can chicken is actually a misnomer. They brine their chicken in a special beer brine and grill them indirectly. Jeff’s chicken arrived completely unviolated. Jeff’s wife had a salad and Marty had something too. By this point I was too drunk from the Hopslams and gorging on amazing food to pay attention to things.

After Lunch
Marty had arranged a behind the scenes tour led by Larry Donahue – the Corporate Chef at Weber Restaurants. Larry was amazing. Here are some things we learned:

Parting Ways
As we (I) sobered up and got out of the restaurant staff’s hair, Marty sweet talked the manager into letting us take the replica original Weber Kettle outside to get some photos in better light. This is when we stuffed it into my car and hauled ass out of there!

Just kidding. As much as I wanted to take that mutha home – I just couldn’t do it. We did measure it up real good so we can all build a replica for ourselves though! Marty has the measurements – don’t mob me for them! 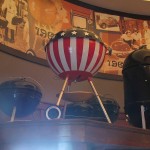 This red white and blue painted weber kettle sits above the entrance. 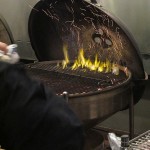 Here you can see the open flames the chefs are about to cook on. 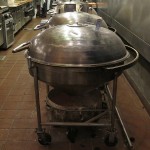 Looks kinda like a ranch. But clearly it’s not. 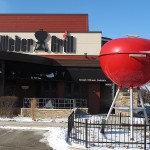 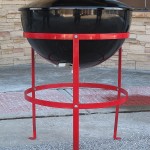 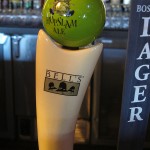 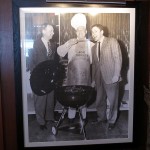 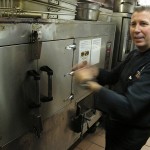 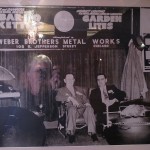 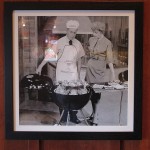 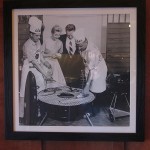 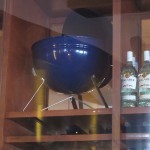 A rare blue jumbo joe. Locked up behind glass. They knew we were coming. 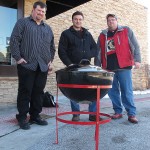 Here are 3 of the 5 original founding club members.