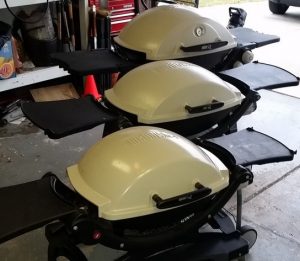 In 2003 Weber introduced a line of grills called simply the Q. Weber has been long known for its charcoal kettle grills as well is the Spirit, Genesis and Summit line of gas grills but the Q series is a bit of an anomaly.  The smallest of the line know as the baby Q (100/1000 line) is very portable yet powerful enough to make an excellent sear on a steak.  The largest of the line (300/3000 line) is not portable but a stationary grill which could be the source of some of the confusion, are they a portable line or a stationary line of grills?  The answer quite clearly is both and as you will see in the following depending on your need each and every line has its strengths to fit all needs.

The Q series grills are designed for grilling, although there are cases of people roasting on them, grilling is by far the strength of this series.  The cooking grate is made of porcelain enameled cast iron the burners are not inhibited by flavorizer bars so the grate gets direct heat from the flame.  Weber creatively created the grates to ensure that any grease or drippings bypass the direct flame. 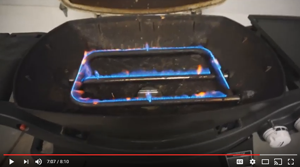 I made a video showing the differences between the Weber Q models.

Some of the common features in all lines of grills are as follows
– Cast-aluminum bodies
– Glass-reinforced nylon frames
– Cast-iron cooking grates coated with a porcelain enamel
– All gas models use the same regulator, Weber’s Infinite Control burner valve 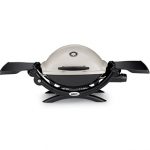 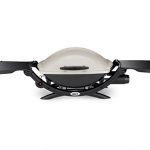 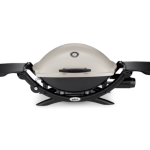 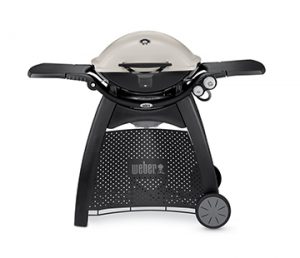 From 2003 to 2013 each line of grills were referred to as 100, 200 and 300.  Each line also had a base model and upgraded model (100 and 120 respectively).  The base and upgraded models included the same burners and grates, upgrades would usually include an electric starter, thermometer, side flip out tables and taller lid.  In 2014, Weber changed the line numbering from 100’s to 1000’s so the 100 became the 1000, 220 became 2200 and so on, Weber discontinued the Q300 and does not offer a Q 3000, the only 300/3000 Q you can buy now is the Q3200.  Weber also changed the look of the grill slightly the only significant change is all lines included a split grate system where previously the 300 series was the only line that had 2 grates.  A benefit to this is the ability to insert a griddle on one side of the grill for breakfast or other griddle needs.

In 2015, Weber started offering different color options from Black, purple, orange, blue red and the standard titanium color.  These were only seen on the 1000 line of grills.  In 2016, Weber started to introduce team themed grills starting with colleges like Michigan and Florida State, when the Chicago Cubs started the post season of baseball they introduced the first baseball branded one.  Expect to pay a premium for the sports logoed versions in most cases it is an additional $100 over the cost of the ones without logos.

Weber Q non-Gas versions
Plug’r in
Weber sells 2 versions of an electric Q.  They are based on the 100 (140/1400) and 200 (240/2400) line of gas grills.  The distinguishing feature of these grills is the dark gray lids that come on all electric Q grills.  The Electric Q grills were introduced to the public in 2009 and are still sold today. 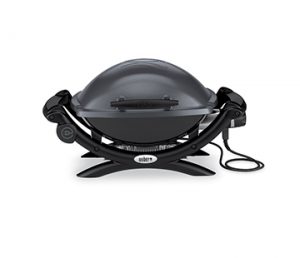 The Char Q
Yes that’s right Weber briefly made a charcoal version of the Weber Q.  The configuration and price of the grill proved to not be very appealing to the customers.  The Char Q was built on the 200 frame so it was a large portable charcoal grill and with the price of $150 it proved to be something not worth it for consumers.  The Char Q was released in 2008 and Weber ended production in 2011. 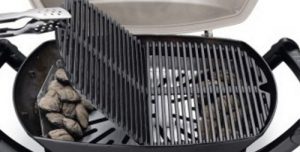 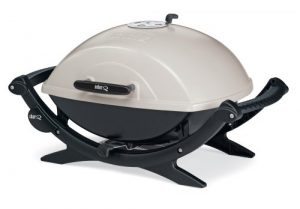