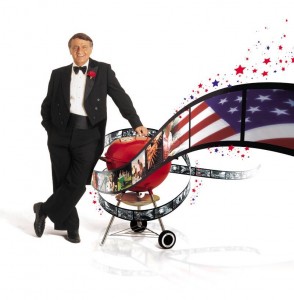 February 11th, 2016 marks the 23rd year of the passing of George A Stephen, founder of Weber Stephen Products, and a man who’s vision and relentless pursuit of his dream makes him one of the most iconic figures in the history of barbecue. Over the past several years I’ve spent a number of hours researching the early days of Weber and the uphill battle George had to turn his idea into the American icon it is today.
George Stephen’s Family came to America from an area near the border of France and Germany. The family made their way to the Joliet area of Illinois and there they set about farming and they were quite successful at it. One of Georges relatives had an opportunity to apprentice in the metal working business at an early age and this is likely how others in the family made their way to the Chicago area and became involved in that industry.
In 1885, in Chicago, two brothers by the name of Weber had set up a metal spinning and stamping business near the west loop of Chicago. They occupied several different loft buildings in that area over the years and in 1933 they hired George Stephen, George A Stephen’s father. It was the depression and George’s father had lost his job as an estimator for a sheet metal company and the Weber Bros hired him as a salesman. The first years there were lean for George’s father and I’m told he spent more on gas than he made in his first year. By the time WWII comes around George’s father is a majority stock holder along with one of the Weber Brothers sons and an unknown third party who is also the plant manager. This third party then passes away and George’s father assumes that role with the company. With the war going George’s father would work endless late night hours filling the orders and contracts created by the war effort. Shortly after the war ends George A Stephen joins the company. 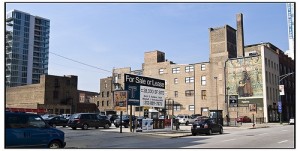 With George’s father firmly in control of the company, George sets out to make his mark. His idea is to find a product that will keep the company prosperous after the war. The company at this time is set up for spinning and stamping as well as sheet metal bending and fabrication. Weber Brothers was producing a few products on a regular basis; a pulverizing mill, brewing stands and a water distiller and George A thought they needed something more. George came up with what’s called a posting tray which holds posting cards and the item did quite well on the market then George came up with the garden lamps and a few other items that were sold. But George was looking for something bigger and better.
By the early 1950’s George’s kettle is on the drawing board and George is convinced that this is the product the company can use to take the next step in its growth and future. Despite George’s father being in control of the company there are still other stock holders who are not quite convinced and they choose a more calculated and slow approach to the project. The kettle was expensive to produce and it tied up the company’s spinning machines keeping them from other contracts they needed to fulfill. It was a bird in the hand is better than two in the bush situation. The price of the finished product was around $50.00, or $450.00 in today’s money, and when other barbecues on the market at that time were selling for around $7.00 you can see it was a tough situation for George A to try and sell to the stock holders. Good thing for us George never gave up and with his father by his side George was able to keep the idea and product in the company’s line up. George knew he had to increase sales and prove his idea was a winner and for this he took his product out to the people. He blanketed the Chicago and surrounding region with cooking demonstrations using a group of trained cooks, many of whom many worked for the company during the week and cooked on the weekends. George also went head to head with The Big Boy Brazier style grill at many conventions and events across the country, but it was apparent that George’s idea of covered cooking was the far better option.   By 1956 George’s kettle was becoming more and more popular. The company wasn’t able to keep up with demand and George realized that in order to keep costs down he would have to streamline the operation. He did this by outsourcing the components to other companies that were better equipped. The days of spinning and hand painting the grills were replaced with the deep drawing process and porcelain enameling. George was contracting out many of the parts for the grills to other companies to keep up with demand and to not tie up the Weber Brothers machines and employees, though a few items were kept in house and produced by the metal works. The company expanded, adding an area to assemble the finished parts and the BBQ division of Weber Brothers was born. 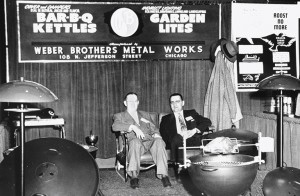 -White and George A at McCormick Place trade show-

By 1959 sadly George’s father had passed away leaving George A the majority stock holder of The Weber Brother Metal Works. George now had nothing standing in the way of building his Barbecue empire and Weber Brothers Metal Works had to make a decision, go all in with Georges idea or not . The President at the time, Mr. White, was getting up there in age and George A was looking to move the Metal Works to a larger facility and expand the operation even more. For Mr. White this was an expensive proposition and at his age he wasn’t willing to take that chance but instead made an offer to George A. Mr. White would sell George A his stock in the metal works along with some additional cash in exchange for the equipment and contracts George no longer needed. By late 1959 the deal was struck and George A Stephen now has to answer to no one. He moves the Barbecue operation to Wood Dale, Illinois and never looks back. He adds his family name to the company making it Weber – Stephen Products. George also continues to streamline the operation by adding the machines needed to eliminate the parts he was outsourcing and eventually outgrows Wood Dale moving to Arlington Heights. 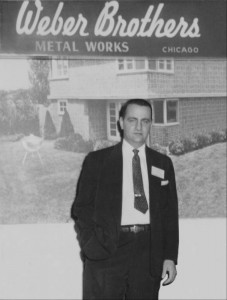 George A Stephen it’s said was a very private man who didn’t care for interviews so George’s side of the story on those early days at the Metal Works are unfortunately lost to history, unless a family member comes forward. I was fortunate enough while researching the solid metal ash pan on my Weber Brothers Metal Works Grill to speak with and interview Mr. White’s son who told me this version of events as best he could remember them. His father who cut the deal with George moved the Metal works from Chicago and went on and continues to produce metal parts to this day, also under the name Weber.  Mr. White’s son, who like George had a father who worked for the company, would often go and demo cook and said he must have cooked in half the hardware stores in Chicago as well as a few TV appearances showing off the kettle and what it could do. It’s these men, who under George’s vision and grit, that built the company literally from the ground up and today we see Weber going back to those roots by offering Grill Academies in several cities worldwide, as well as the Mobile Grill Academy visiting other locations and bringing the art of the grill to people worldwide. George A Stephen will be remembered always so take some time and grill something in his honor.