I want to run down a few standard uses of aluminum foil in BBQ and also offer up a few, perhaps novel ideas to try out.

By containing the heat, the piece will move through the “stall period” more quickly, the zone where collagen converts to gelatin and delicious BBQ happens.

Wrapping in foil will soften your bark.  If a real crispy bark is what you desire, a short time back out on the cooker out of the foil can crisp it back up, but keep in mind, this makes for more moving around & fiddling with your goods.

Brisket, for instance, I’ll do one of two ways.

Foiled Brisket Method #1 – pan and foil up on one of the wife’s cookie racks: 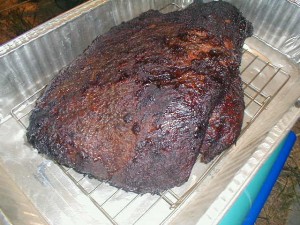 With foil over the top, adding in some beef broth & spices to the pan for a braising effect : 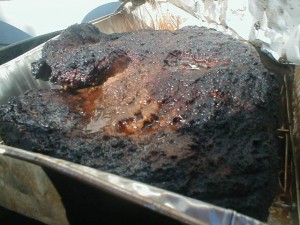 Foiled Brisket Method #2 – just plain foil wrap @ about 2/3 or a little more through the cook : 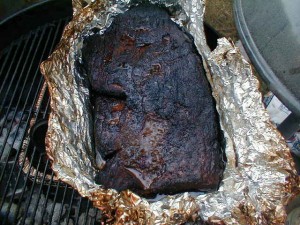 Here’s an example of a brisket I cooked up.

These foiling methods will also basically stop the smoke flavor from continuing to add in and get stronger; a choice for those who like a milder smoke flavor…………………

I’ll refrain from being too precise as to when to foil, temperature, which method to use, if you should throw out the foil & use butcher paper, etc. as those topics get hashed out endlessly on BBQ forums everywhere……suffice to say, the stall happens at about 155f to 170f depending on product, cooker temp & size…usually the temp begins rising again above 170f +

See Here, for a bit more info on this :  Slow Cooking

Looking at the piece, noticing the outside color, giving it a poke or two are clues as to when to wrap, if it needs to wrap at all.

Now, as for pork butt, the same basic stuff applies. Wrapping the butt with foil to move the stall along is certainly a choice – I choose not to. I like the bark cooked through – nice and dark : 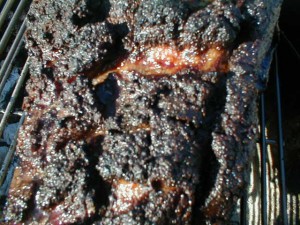 But, I will however wrap it to rest for a good length of time (1-1/2 to 2 hours) AFTER the cook, to allow for the internal juices to settle in & redistribute throughout the piece : 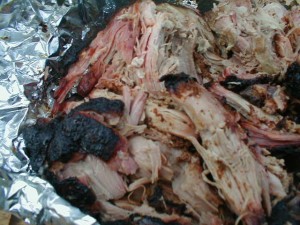 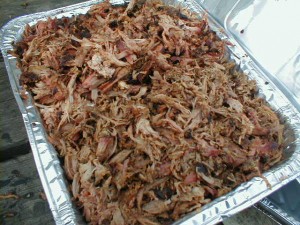 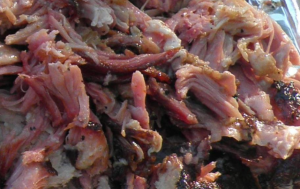 Ribs are another use for the humble foil….. the 3-2-1 method a lot of people talk about is originally for full spareribs cooked at 225f. Nowadays, with more people cooking at higher temps, the time wrapped in foil is often reduced ( the 2nd number, those are hours BTW……3 in the smoke, then 2 wrapped, then 1 back out to firm the bark & sauce if desired)

Loin back ribs, or baby back ribs, will be a somewhat shorter cook, but may benefit more from wrapping in foil, as there’s less fat to tenderize the meat.

Originally 2-2-1 at the lower heats, perhaps 2-1-45+ minutes might be a sequence at a slightly higher cooking heat.

Now, let’s turn the corner into some novel ways to use foil……….

Instead of foiling at a middle point for ribs, one thing I’ve had some great success with is to start off foiled, then for the last 1/3 to 1/4 of the cookup, to set them out & layer glaze over the flat…… Here’s Satsuma sweet plums with cinnamon, kiwi vinegar & several other spices, foiled, then glazed with the juice FROM the packet after a time baking indirect in the foil….extra added, thickened glaze brushed on, too… 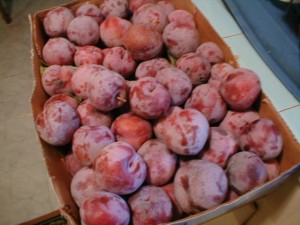 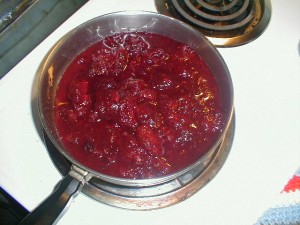 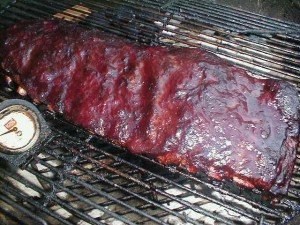 Another one is large full spare ribs, with BBQ sauce & pickle juice…. 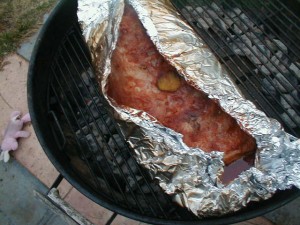 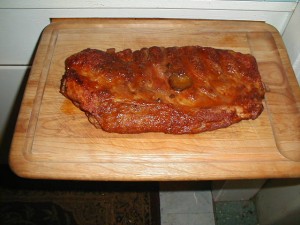 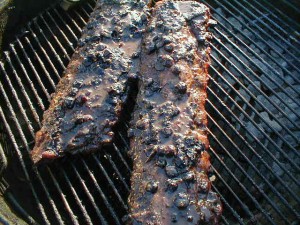 Save the juice in the foil packet, set aside & it will thicken a bit from cooling, then pour over the ribs several times, baking more in between…..messy (foil drip pan’s not a bad idea) but extra good ………… 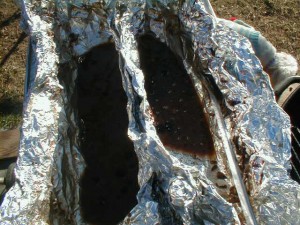 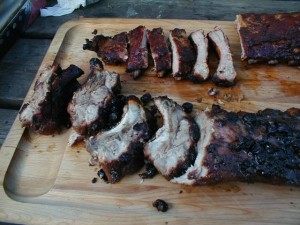 Not a lot of snazzy smoke ring doing it this way, but boy, they sure taste good……the baking time drives the flavor into the meat somewhat, then the glazing on top of that makes these fly !!!!

Corn, taters, zucchini & other vegetables can benefit from a baking in foil 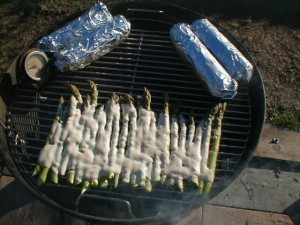 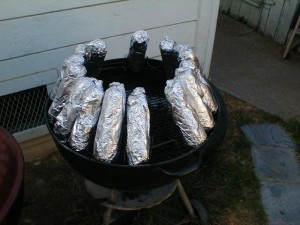 Zucchini boats, from large one hollowed out…. 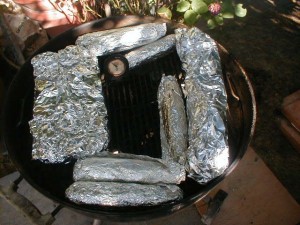 (If you don’t have large ones, just thick slice regular size & add in other vegetables or rice / taters to the packet)

Taters in the basement 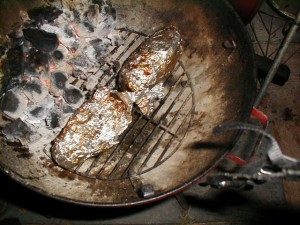 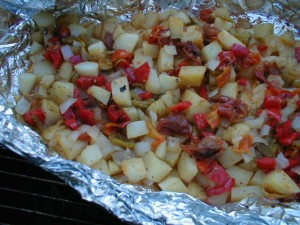 I enlisted the help of my buddy MacEggs (Mark C. from Canada) to show some other creative ways to “foil up” ~~~>>

As a center drip guard and air flow diverter with the snake method : 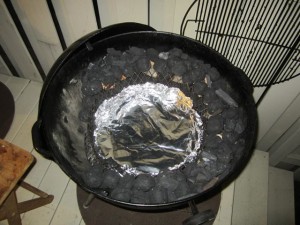 As a large diverter for cold smoking : 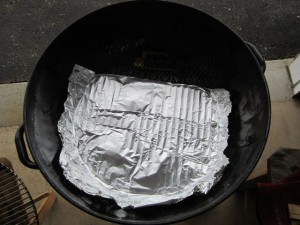 Foil makes a great protective flashing while cooking ribs : There’s plenty of room on a 22 for what you’re doing.

I use the snake method and I like to use foil to cover the center, as well as the areas where the meat is over the charcoal. The intakes are open just a smidge … walk away … check on them after 4-5 hours. Usually close to  done 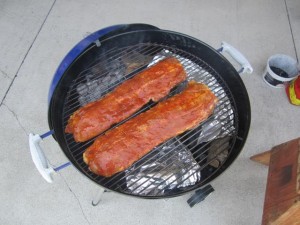 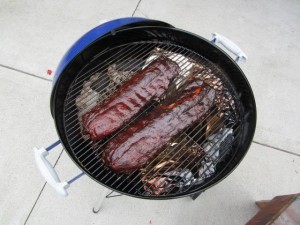 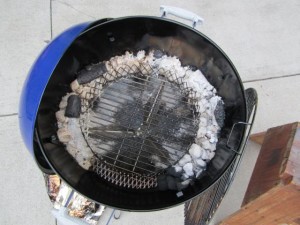 Foil can serve as a burn guard for your turkey : 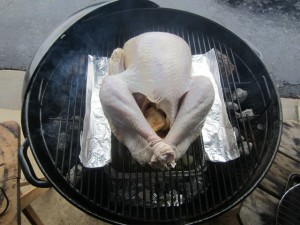 In various positions setting up the Kettle Pizza :

When I got my black MBH, the charcoal grate was not in the best shape. However, I didn’t want to toss it.

So I decided to modify it and use it exclusively for the KP. Works great. I also use another grate on the upper part – some HD aluminum foil, and fire brick.

Also, works great! A much more cost effective way than buying the add-ons that the KP people offer. 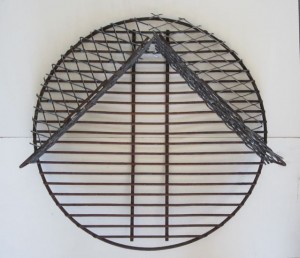 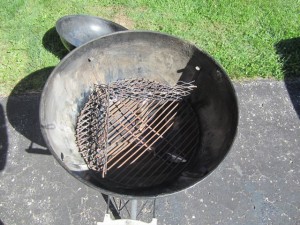 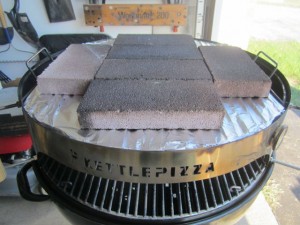 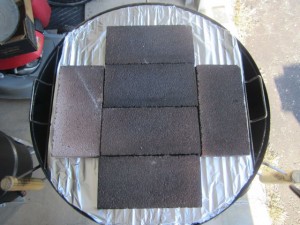 (Links to further information on most cooks are in red )