This Thanksgiving, my family and I decided to stretch out our feasting– we would join some friends at a church nearby on the big day, then gather with a smaller group on Friday for a quieter get-together.  Which meant a lot of fun and friendship, but which also meant a chance for this die-hard Weber fanatic to engage in some serial processing (doing two iterations of the same cooking process sequentially) as well as enjoying some substantial charcoal time on two lovely days. 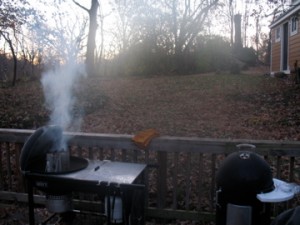 Frost on the smoker; fire in the Performer.

I brined the first bird starting on Tuesday night, then dried it out overnight in the refrigerator, then fired up the smoker on Thursday  morning.  I’ve always done my turkeys on the Weber Kettle, but I usually end up with ashes in my drip pan, making the gravy inedible.  So my plan was to cook the turkey on the top rack of the smoker while catching the drippings in a pan placed on the lower cooking rack.  For good measure, I put some carrots/onion/celery in the pan along with the neck and giblets. 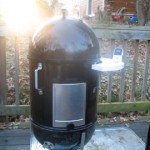 Sunrise over the smoker.

Turkey #1 was for a very special church we sometimes attend– a church composed primarily by those who live outdoors, in their cars, or in some kind of transitional housing situation.  It is a room full of brave, noble, hardworking, deeply grateful people– the perfect place to give thanks.  And also a group that makes you want to bring some really healthy, tasty food to share. 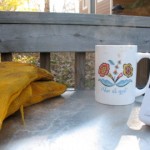 It was great to catch up with so many friends, and it was also fulfilling to share some food.  When we first arrived, the folks staffing the kitchen kindly told us that they had plenty of turkey, so we set ours in the corner of the kitchen and helped our kids make their plates.  A few minutes later, I checked in with the volunteer 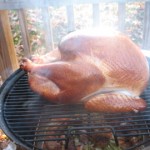 One hour in, and the giblets and drippings are coming along nicely below.

kitchen staff, and they were all intrigued about the turkey in the corner– who made it? why did it smell so good? was it smoked?  In a room literally full of tray after tray of turkey, this one stood out.  I carved it up and passed bites around the kitchen, to everyone’s great delight.  After which we served it up to everyone else. 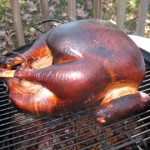 One of the benefits of doing two turkeys in a row was that we were able to make stock on Thursday night for our Friday meal.  We put all of the bones–plus the contents of the drip pan, plus a fresh dose of vegetables– into a big stock pot and simmered it all afternoon and evening. 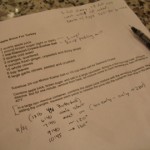 Learning from the past, plotting, and planning.

While all of this was happening, Turkey #2 was in the brine.  I pulled it out on Thursday night to dry inside the refrigerator in preparation for the next day’s cook. 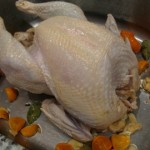 Out of the brine, and into the refrigerator.

The second turkey was for dinner on Friday, so I didn’t need to start quite so early. 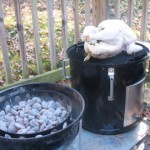 Starting with a hotter fire this time. A few chunks of apple wood, and we are cooking.

The cook went much smoother as well, and I shared some malted beverage with my friend/neighbor/fellow Weber fanatic Aaron as we discussed thermodynamics and other matters of the day. I was especially glad to have him on the scene as I was called away to pick up one of our dinner guests from the airport– I left the turkey in his capable hands, and he finished it with a flourish.

As a thank-you for my trust (and turkey), he went ahead and roasted some brussels spouts in a maple syrup glaze,  to utter perfection.  Out-pacing a fella’s brussels sprouts skills on his own Performer is arguably rude, but I couldn’t hold a grudge.  Thursday’s gratefulness stretched over onto Friday’s gathering with friends, which extended well past the dessert of pumpkin pie and flourless chocolate cake. Thanksgiving, it seems, is best enjoyed over several days. 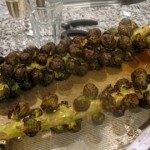 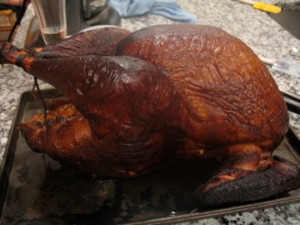