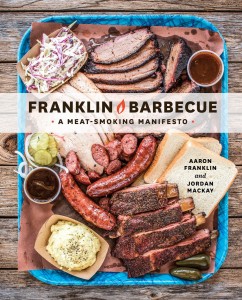 We’ve been waiting for a long time… watching and re-watching Aaron Franklin’s PBS TV episodes on YouTube, watching Tony Bourdain and other food celebrities enthuse on TV, re-reading our copy of Texas Monthly where he took top honors, and peeking in the margins of the images for secrets and trying to pick up nuances of his techniques.  We’ve heard first-hand accounts and rave reviews of the food from people who start lining up at 6am for the 11am opening (and it’s always all sold out by 2).  We’ve read about his generous leadership at the prestigious Camp Brisket that’s held every winter at Texas A&M University.  We watched the film ‘Chef’ with special interest, rewinding the scenes shot with the man himself at Franklin Barbecue (and scoffing at the Hollywood version where folks eat brisket right off the smoker before it’s had a chance to rest).  We’ve tracked the rumors about his cooking techniques and wood choice and legendary fire control, and we got geeked when the book was announced last spring.  Well, the day is (almost) here.

Yes, it’s good.  Really good.  Better than any of us expected.  I’ll tell you more about that later (and give you a chance for a FREE copy of the book).

But first, let me give you the straight scoop (brace yourself!):

Aaron doesn’t like charcoal, and he’s not fond of your Weber kettle, either.  Now this isn’t to say that he wants you to throw any of that away– he is just writing about what he knows.  And what he knows (perhaps better than anyone in the world) is central Texas barbecue.  Brisket, mostly, though he also makes beef ribs, pork ribs, pork shoulder, turkey, and sausage (and he includes recipes for all of these in the book, as well as sides).  Aaron cooks exclusively with only live fires of seasoned oak, and he knows his stuff.  So much so that– unlike other food authors– he’s not going to patronize you by telling you he knows how to use your cooker, or how to cook your food, when he obviously doesn’t.  Instead, he’s going to tell you what he knows in the hopes that it will inspire and inform you and help you tweak your skills.  Aaron writes about central Texas barbecue because he respects the diversity of barbecue and because he trusts his readers to translate that knowledge into their own context.  Which really works: this  kettle-head got so hungry when I first read this book that I needed to step outside and cook some baby back ribs, and following Aaron’s guidance about fire management and proper smoke volume, they were by far the best ribs I’ve made or eaten in my entire life.

Aaron is not going to give you a bunch of recipes.  Not because he’s not willing to share, but because that would just be blowing smoke.  If you’ve been cooking for long, and especially if you cook with live fire, you know that recipes only go so far.  There are a zillion variables– from fluctuations in meat to humidity to temperature to wind to weather to sun to moisture in the fuel–  so detailed recipes would only lead the reader astray, or get them stuck in some rut.  What Aaron offers instead is wisdom and experience, the kind you get by doing the same thing day after day, year after year, keeping an eye on the details that make the product better with each iteration.  He won’t show you what to cook, he will show you how to cook, and how to learn as you cook.  And that’s better than a recipe any day. 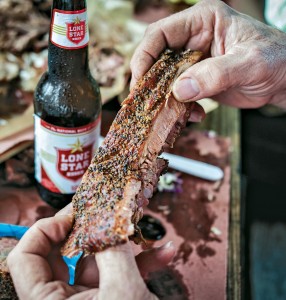 This book is really pretty.  I know, most of us would like to think that we don’t care about fancy photography and graphics, but we really do.  Or we will when we finally hold this book in our hands. Just as we work to get that perfect combination of crust and shimmer on our steaks, you will definitely appreciate the gorgeous, large-format photography featured in this book.  It’s a stately hardcover book, and the photos took my breath away.  But be warned:  you will get hungry, so make sure you have some leftovers handy (or better yet, have a kettle or WSM going when you crack open this book).

Like most good things in life, quality barbecue is all about preparation, and therefore so is this book:  comprehensive explorations of wood, fire, smoke, smokers, meat, seasoning, and cooking.  In fact, these explanations are so extensive that they might test your patience.  But that’s the point, isn’t it?  There is no secret to barbecue, and there are no shortcuts–  only attention to details and long experience that eventually becomes expertise.  In other words:  patience.  Aaron’s got it, and he’s ready to teach you too.

FRANKLIN BARBECUE is an incredible accomplishment, and a genuine work of art:  inspiring, informative, passionate, humane, funny.  Among it’s many accomplishments, nothing quite matches this:  the book is technically precise and yet completely conversational– it’s like you’re drinking coffee and cooking with Aaron at 4am, soaking up his knowledge and stoking your fire for barbecue.   You won’t agree with everything he says, and I doubt you’ll trade in your kettle collection for the offset smoker he teaches you to build, but your cooking will never be the same, either. 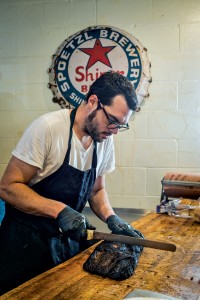 WIN A FREE BOOK:  The book won’t be released until April 7, but Aaron’s publisher has generously provided five copies of this book, and we’re excited to give them away to WKC members (if you’re not yet a member, go ahead and join in the fun!).  Enter the drawing by leaving a comment below, or by sharing the news on Twitter or Facebook.  You can enter once per day via all of the methods.  The drawing will take place in one week.