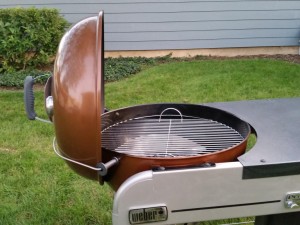 With the bigger and deeper lid bail, the 2015 Weber Performer’s lid opens wider to allow better access to cooking area.

Gone are the ‘cheap plastic’ tables that many complain about scratching, staining, and cracking. Weber has ditched the glass reinforced nylon table surface and replaced it with a hammer finished enameled METAL surface. The new surface is more durable and will resist stain. It appears that the frame and bolt patterns are the same – so the new table SHOULD bolt on to previous year’s models as well.

But wait there’s more! Saving the best for last, the slide aside lid bail system has been improved. The rollers are longer and the clearance between the bowl and bail is bigger. This means that the lid will slide more easily into it ANNND it will slide further and farther away from the bowl. Many taller grillers were complaining that the open & bailed lid was still blocking a significant portion of the cooking area due to the angle that it sits. While I never really had an issue with this (other than while trying to take some pictures of my grilled food, I can see how some people and styles might be inconvenienced.

The handle has been ‘upgraded’ to the bolt on handle instead of welded. This stirred a bit of worry earlier this year, but there’s been no further complaints of loose handles or quality issues. In reality, the bolt on handles are likely a change for the better. Time will tell, as this change affects all Weber charcoal models for 2015.

Another change is the 2015 enclosed ash catcher. The bottom lip of the ash ring is flared for easier attachment and the locking system is built into the tension of the handle rather than a twist to unlock. So far some of the early adopting WKC members have stated that the strength required to release is higher than expected, so people with weak hands may have an issue with this new change. The new ash catchers will be on all 2015 One Touch Golds, Performers, and 26″ charcoal grills.